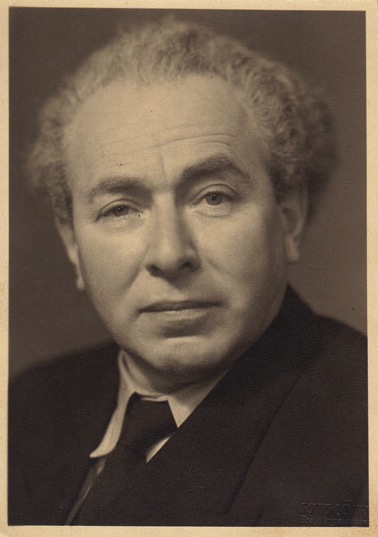 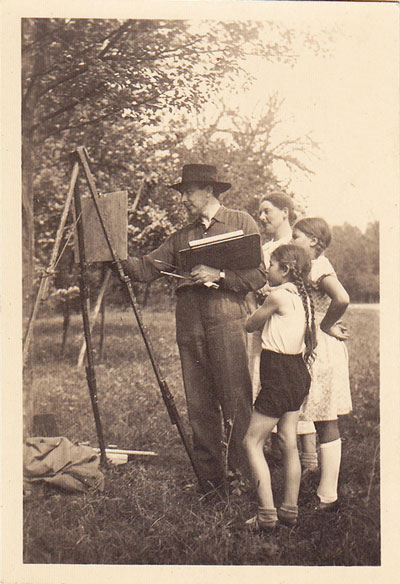 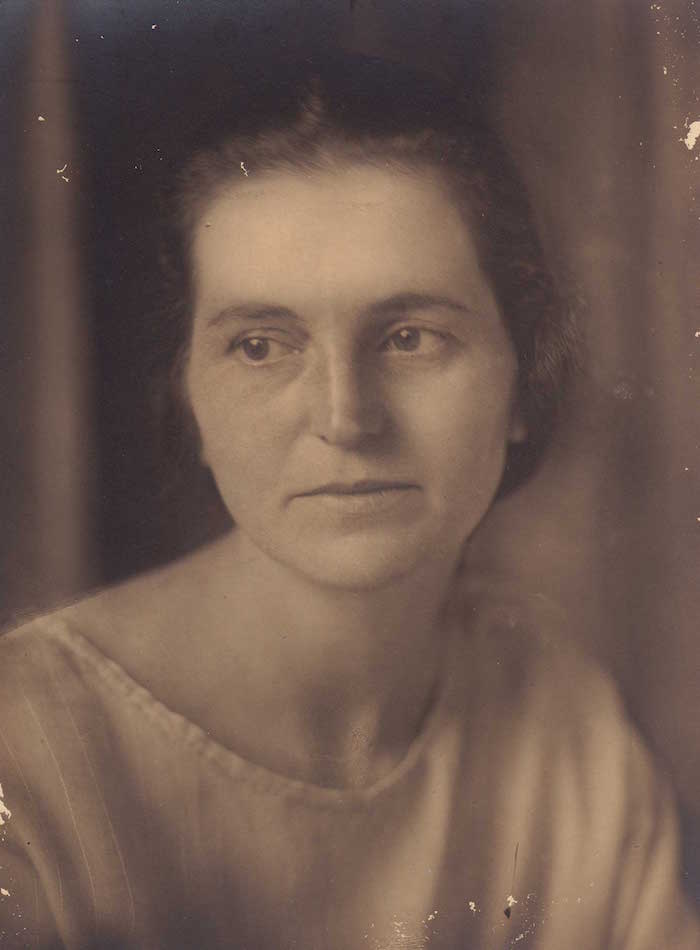 After the art has nothing more in common with nature the people will destroy nature too.

Hermann Fechenbach was born in 1897 in Wurttemberg. He grew up in Bad Mergentheim where his parents had an inn, which served as a meeting place for the local Jewish community.

He fell in love with drawing at the age of three. His sensitive and shy temperament made it difficult for him to relate to the outside world.

His school education was undistinguished. He retreated into drawing at every opportunity as an escape from failure to achieve academically. Although his art tutor visited the family home to inform his parents of his great potential this praise was of comfort to people who saw commerce as the only sensible career.

He left school early and through family connections with clothing retailers received training in window dressing. His skill with brush writing was quickly recognised by a big firm in Dortmund where he was responsible for the displays in 10 large windows.

He received his conscription papers in 1916 and recalls “being as patriotic as any other fool”. In August 1917 he was involved in a grenade attack in which he was the sole survivor. With serious injuries to both legs he struggled to safety and was eventually transported to a front line “slaughterhouse” where the first of a series of amputations was performed which led to the loss of his left leg.

As a result of his injuries his father dropped his opposition to him becoming an artist.  His formal art education started in 1918 with training at a Stuttgart handcraft school for invalids. He attended the Academies in Stuttgart and Munich to learn painting and restoration for 3 years. He was influenced at this time by Max Liebermann.

In 1923 he went to Florence for a year. While in Florence he started to produce a series of miniature wood engravings to illustrate the stories of Genesis. This was followed by periods in Pisa, Venice, Vienna and Amsterdam.

In 1924 he returned to Stuttgart to paint in the contemporary style “Die Neue Sachlichkeit”. Every spring and autumn he exhibited at the “Kunstgebaute” which served as the showcase for all serious artists of the period.

His professional status “Kunstmaler und Grafiker” was recognised by Berlin in 1926. Practically all his work from this period was sold following exhibition.

In 1926 he collaborated with an architect friend to build a bungalow in Hohenheim, a non-Jewish area and a suburb of Stuttgart. Hermann alternately lived in his country bungalow and his town studio, producing portraits for sale or barter and wood engravings for his own pleasure.

In 1930 he married a non-Jewish professional photographer – Greta Batze. They had a studio in Stuttgart, which was used to teach art to a group of 12 students.

In 1933 the Nazi influence removed his name from the official state register together with the right to exhibit.

By spending most of his time in his bungalow out of the Jewish quarter the Fechenbachs escaped being registered by the Nazis for some years. They were ostracised and abused by their non-Jewish neighbours. Hermann made weekly visits to friends in town to teach them the practical skills they would need assuming they were to escape from Germany. His energies were directed towards protection and survival.

Ultimately the Nazi persecution forced the Fechenbachs to flee their homeland. They moved to Palestine for 3 months in 1938, but found the political and physical environment unsustainable.

Greta arrived in England penniless in January 1939 to work as a domestic servant and to find a guarantor for her husband. Hermann arrived in May 1939. They moved to Blackheath a few months later. Hermann resumed his painting and engraving as a means of earning a living. He raised enough money to get his parents out of Germany to join his brothers in Argentina but was unable to save his twin sister Rosa who died in a Nazi concentration camp.

In 1940 Hermann was interned in Bury as a suspect alien. He protested about his treatment by starting a hunger strike. Because of his persistence he was moved to a prison in Liverpool. From Liverpool he was moved to the Hutchinson Camp in the Isle of Man with fellow artist Kurt Schwitters.

Arrangements were made for Greta to be accommodated near by. While interned he commenced work on “Refugee Impressions”, a series of lino cuts (no wood was available).

In 1941 when released from internment the Fechenbachs came under the sponsorship of Dr. Bela Horovitz, the Austrian art publisher who in turn made an introduction to Professor Tancred Borenius.

They were offered lodgings with a family in Oxford.  Hermann had his first public exhibition for many years in a small gallery in Oxford in 1942. A second exhibition of oils, pencil drawings, coloured lino cuts and wood cuts held later in the year was opened by the mayor of Oxford and critically acclaimed.

In 1944 the first London exhibition took place at the Anglo-Palestinian club in Piccadilly. There were two exhibitions at the Ben Uri Art gallery during this period.

In 1948 a second exhibition at the Anglo Palestinian club was inaugurated by a member of the Rothschild family and several members of Parliament. This was a great success.

In 1944 the Fechenbachs moved to a top floor studio flat in Colet Gardens. Open exhibitions were held each Spring at the Embankment from 1946 to 1951. Movietone News produced a short feature on the artist, which was shown in cinemas in England and Germany.

A number of factors conspired to deter Hermann from continuing the struggle to keep in the public eye. As a German refugee artist he used media and styles, which were not popular in London at that time. As a cripple with no readily available help to transport canvases, the effort of setting up an exhibition was considerable. Commissions and craft work such as antique porcelain restoration provided an adequate income. His shy and retiring nature, his rudimentary English and his unwillingness to follow fashions made it more attractive to work in isolation.

In 1962 the Fechenbachs moved to Denham Green in Buckinghamshire.

In 1969 he published the Genesis story in a hard back volume containing 137 prints. He started to research the fate of the entire Jewish community of Bad Mergentheim during the period of the second world war, liaising with historian Dr. Paul Sauer and Professor Max Miller, historian and theologian. In 1972 Kohlhammer published his partly autobiographical book “The last Jews of Mergentheim”.

Greta suffered from a progressive illness during the 70s. In spite of his own disabilities, Hermann nursed her to the end. Greta died in 1982.

Hermann placed an advertisement in a magazine called the Lady for a resident housekeeper in 1982. He claimed that within the first minutes of interviewing the applicant Mary Burne he was sure that he should imprison her for the remainder of his life. They were married in December 1983.

Apart from the normal domestic activities, Mary performed a secretarial role, organizing his wood blocks and arranging the translation to English of Hermann’s book – the last Jews of Mergentheim.

Mary introduced her son Geoffrey Burne to Hermann. They formed an instant admiration society, listening endlessly to Hermann’s stories of his eventful life. Hermann often asked Geoffrey to drive to see the natural landscapes that he would have painted had his new Irish “chauffeur” been available when he was needed in the late 1940s

In 1984 encouraged by a curator at the Tate Britain, Geoffrey contacted Jonathan Blond who had a gallery in Hanover Square and a reputation for appreciation of the “black and white” medium.

Jonathan mounted an exhibition in 1985 of Hermann’s prints from February 20th to March 16th. He sold 11 prints.

When Hermann saw the prices paid for these prints it brought tears to his eyes. At the age of 89 with just a few months to live, Hermann was starting to receive the recognition his work deserved.

This site is decidated to the work of Hermann Fechenbach, artist and engraver.

Born in 1897 in Wurttemberg in Germany and grew up in Bad Mergentheim where his parents had an Inn which served as a meeting place for the local Jewish community.

With this site we, Geoffrey Burne and myself, will be building on the wealth of information we have about Hermann Fechenbach and his extraordinary life.

We have most of his work including the original wood blocks, lino cuts, writings and photographs. We will be printed limited editions of his work from his wood engravings which we will be making available through this site.

We would hope that anyone interested will contact us to help build a fuller picture as we have many photographs of people and place that are still unknown to us.

We are constantly adding more information and photographs to the site and would be grateful of any information anyone can supply and help us with to build as full a picture of Hermann Fechenbach and the Fechenbach family.